I’m usually a bit of a curmudgeon when it comes to Christmas – and I think that’s largely down to a combination of having grown up in a vicarage and in the seemingly ever-earlier commercial appearance of Christmas bling in the shops. Nevertheless, I do seem to be relaxing into things a bit more this year.

Last weekend we had a combined house warming and festive intro at my youngest brother’s new house, while this weekend saw the return of the slightly secret ‘Douze’ event run by another brother. The name originally came from the small number of people he and his wife could actually fit into their flat – and this year he ran a much smaller and intimate venue for as many of the original miscreants as could make it. Next weekend is a more family-orientated/daytime event, which we’ll drop by to after work – if only to drop off Christmas presents for people.

We also went to the Harry Potter tour at Leavesden Studios, which we can highly recommend. Even with Lady M’s mobility still drastically reduced, we had a smooth experience and never felt rushed. We’d phoned ahead to ask about mobility access and were told that all we needed to do if we wanted to borrow a wheelchair was to ask for one at reception.

So we took them at their word.

And they delivered on their promise.

T’other half was using my skull-topped cane to hobble round from the car park, but it was plain to see that this wasn’t going to be a viable option for exploring the exhibition for over three hours. I checked with the first person I saw when I got there, and sure enough I was able to talk to someone at reception within moments. Under a minute later, a wheelchair was produced and a very grateful Lady M was able to sink into her chariot. We were offered the opportunity to fast-track past the queue – but decided to stick with it, if only to be able to take some shots of “Harry’s Cupboard”, which had been reproduced right at the beginning. 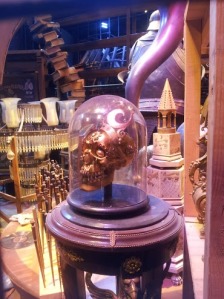 A small collection of prop items

We didn’t wait long before we were shuffling into a couple of filmed segments – and then we were walking through the Great Hall set. Very very quickly, we became even more aware of the huge, almost insane, amount of detail that had been created for this series of films than we had before. Most of the major sets used in the film are still in-situ, and every corner you turn reveals more and more small details. Video segments of interviews and explanatory panels – some of which use interactive touch screens – fill in even more detail about the planning, execution and lore of the films.

And if you ever wondered how much merchandising could accompany a film series… well the gift shop has to be seen to be believed. We resisted a huge amount of temptation that would have decimated our budgets, and bought some chocolate wands to nibble on later. I may have to nip back there at some point to make some sneaky Christmas purchases…