Sunday in the Park

I’ve been lucky enough to grow up in West London, and as happy as I am to be rude about Hounslow I do have to concede that we have some amazing parks. One of those, Osterley, became something of a fixture for my family, and then in turn for the Charleesi as she has grown up too.

Maintained by the National Trust, Osterley is largely freely open to the public, and is used by families and dog-walkers all year round. In the summer, it’s a favourite for picnics, and if it snows you can barely move for snowmen. 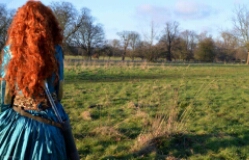 Today, it was Charleesi’s turn to introduce someone new to it. She’d taken a few shots there recently with her new camera and mentioned in passing to Lady P that she thought it would make a good backdrop for cosplay pictures. With half an eye on the weather, the challenge was accepted, and that’s why we spent a good hour or so this afternoon, in the company of Merida from Disney’s Brave.

We were expecting some varied reactions, and West London did not disappoint us. Many people ignored us, or pretended to while casting suspicious eyes in our direction, as if expecting us to break out in song while film crews captured it for You’ve Been Framed. Some of the children waved and grinned, with one young girl running to embrace Merida and having a shy conversation before running back, starstruck, to her parents. Her brother had stayed back, hiding behind his father’s legs, desperate not to admit he was fascinated.

Then we had the older generation, shall we say, who didn’t recognise the character or understand why Lady P was dressed up and having her photo taken on a cold Sunday afternoon. We had some lovely confused comments as their brains caught up with them halfway through the conversations.

All in all, a wonderfully different way to spend a Sunday afternoon. We retired to Maidment Towers for hot chocolate, and we’ll see what awesomeness comes from the shoot.

Photo is courtesy of ItsLottiePhotography.

1 Response to Sunday in the Park