The last time we were in this sort of sunshine and heat was in Florida last year, so it seems entirely appropriate to be walking around a Magic Kingdom in it this year. Any thought that the end of the weekend would see less people in the parks have been overrun by the huge numbers of people flocking to the parks; this hasn’t made things stressful though. 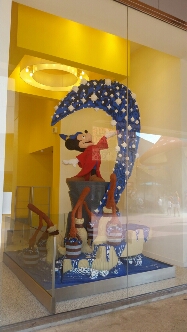 We’ve been fitting our time between the Disney Studios park and the Magic Kingdom as we bought joint tickets. As a result, we’ve been ambling from place to place and just enjoying the flow of things. The stunt show at the Studios was followed by various rides and shops across each park. The holiday has become about the whole experience, and that has included character dining at Cafe Mickey, seeing the Wild West Show, and staying up late for the fireworks.

By far the greatest joy has been the sight of the Charleesi and Cousin A becoming even more thick as thieves, even as Cousin A’s horizons have begun to accelerate away at an ever-increasing rate. Even getting separated from us by accident for half an hour didn’t bother them, and we’ve started arranging to go our separate ways in a more managed way – “be at this restaurant for that time” now becoming a familiar conversation.

This was always going to be an experience to remember for the girls, in celebration of their 16th birthdays and completion of their exams. I’m just blown away by just how incredible, and yet comfortably relaxed, this week is already shaping up to be.