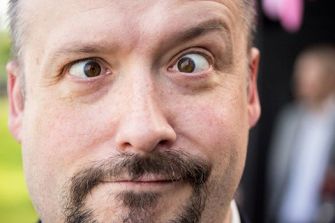 Well – an extended weekend really – with a wedding on the Friday and a christening on the Sunday, and now an attempt to take things quietly that I suspect may be slightly doomed. Rather appropriately, the wedding took place in Ashford Library – the one in Kent rather the one just round the corner – and so we braved the bizarre road layouts of that lovely Kent town in search of the B&B.

By far the most confusing element of that journey was trying to find somewhere to park for the B&B. According to it’s address it was meant to be on the High Street, and claimed to have off-street parking. In the event that  actually proved to be a small ramp out the back of the Mecca Bingo, next to a public car park that seemed to have no entrance. Finding our way in to that car park seemed to involve driving widdershins around the block three times, sacrificing a small goat and watching a hidden portal open from behind some trees. Well, perhaps it wasn’t quite that bad; but pretty much every guest we talked to had similarly bemused anecdotes of trying to find a way in – or of encounters with local drivers for whom the Highway Code and road markings were more aspirations than rules.

That hilarity aside, it was a joy to be able to celebrate Matt and Laura’s wedding with them and catch up with friends and family who were also in attendance. A hog roast in a riverside pub: what a fantastic way to spend an early summer afternoon and evening. Returning to our B&B entailed a simple walk along the river and past the station, which was a pleasant stroll in the warm evening air. Despite the town’s clock chiming every quarter hour, we slept well ahead of the journey home.

The christening was also a chance to reconnect with friends – and was in our local Ashford, making it a weekend of two towns if not cities. A quieter affair, it was a nice cap to the weekend, with the added bonus that while holding the baby of honour I didn’t get covered in milky vomit.