If you ever doubted the efficiency with which the Department of Metanatural Affairs cracks down on attempts to bring back a Mythic Age, you need look no further at what has become a fashion for draping trees in strings of fairy lights. 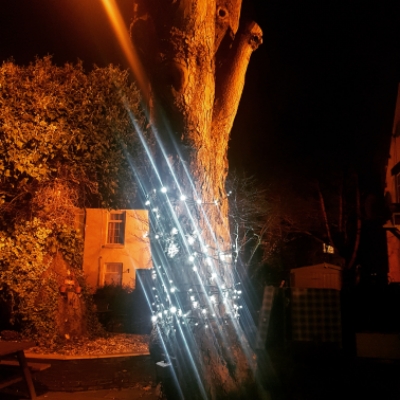 While pretty, and in some cases a simple means of drawing attention to features in public spaces, the strings of lights were in fact first used to bind the rogue dryad Belefegene and her sisters when she started devouring students in the Old Great Deer Park Massacre about ten years ago.
People had of course been stringing lights in trees for years before that, but it was typically in Christmas trees or as part of short lived art projects. The modern configuration of lights now widely sold across the country uses some innovative braiding based on ancient Celtic knotwork that combines energy efficiency with supernatural warding.

It was devised under rather tight deadlines by field agents sent to bring the carnivorous coppices to heel, or at least prevent them from ruining Her Majesty’s celebrations and kicking off some unfortunate diplomatic incidents at the events planned for later in the week in the vicinity.

By the time the honoured guests and dignitaries arrived on the scene, the dryads had been contained in an avenue of trees surrounded by delicate lights that gently illuminated the entrance to the pavilions. Casualties on both sides had been minimal – some bumps and bruises, abraded bark and bent branches.

Agreements were made between the Human and Seelie Courts that the dryads would serve their sentences in situ, and the aesthetics of the display inspired decorators and field agents alike. The Seelie Court declined to comment on how they would detain any field agents pursuing an active pogrom against Law-abiding dryads, and so a gentle peace re-started.

So when you’re in a pub garden and see a well tree-surgeoned trunk, adorned with many loops of lights, when there’s no particular celebration due – it may be a plant elemental doing community service, so don’t go carving your name on it.