I’ve been shuffling my social media cards a bit recently, which has taken up more time than I anticipated. It will also have a knock-on effect here in the form (eventually) of changes to pages and possibly layouts.

Essentially I have created a separate Facebook page and identity as Tango Mike Cosplay so that my poor family and friends can have a break from all the photos and geekery should they choose.

It also allows me a little distance so that people who may be interested can see the public stuff without being brought into the closer Friends privacy circle. It makes sense in my head.

Now I’ve been at great pains to keep my name associated clearly with my online presence, as much for my own personal accountability and brand, so why the new brand for the cosplay, and why that name?

Well it’s quite simple: Tango Mike is of course my initials, keeping the strong link to my name, and the semiotics of a callsign-style identity such as may be used in military, police, or emergency services comms.

It is also deliberate as it ties in to a major project on the cosplay front next year.

I’ve been in conversation with a Halo cosplay group called Fireteam Ascension about creating a cosplay mashup of my gender-bent Harley Quinn with a Spartan Mjolnir suit. The heavy lifting on the design of that still needs to happen, but it will draw on the classic black and red and white livery of the character rather than the cinematic interpretation.

So that should keep me out of trouble

The beginning of November is always simultaneously busy and fraught for a number of reasons – but fortunately this year there has been more on the busy side than the latter.

I try these days to make Lady M’s birthday celebrations a bit of an extended occasion – with presents on the days leading up to it and at least one surprise. This year the festivities technically started while we were at MCM London Comiccon, and I took advantage of the shopping while we were there to load up on suitably geeky presents.

We were also both off work for the full week following the event, and so could spend time quietly reconnecting, and just relaxing in each other’s company. We’d heard of post-Con blues before, but had never truly appreciated how exhausting the come down from a weekend of adrenaline can be. Gaming and late morning’s dominated the week until the Friday evening where we picked things up and went to see the Wessex Pistols at our usual pub haunt. It was a great night out, with a Happy Birthday rendition by the band, and a number of drunken and slightly deafened conversations with various band members afterwards to sweep us into the weekend.

And that’s where the surprise came in: Lady M knew we were going to visit the Charleesi – ostensibly to deliver a television to her room now she had sorted out a license – and that we would stay over as I had told her to pack an overnight bag.

What Lady M didn’t know was that I had been colluding with the Charleesi and the former Lady M to engineer a weekend of activities.

Our guest house was across the road from the Charleesi’s halls of residence, so once I’d booked us in we hauled the television over and called her to come down and let us in. We’d got there late morning, partly to meet check-in times at the guest house and so that the Charleesi could evict other students from her floor from the night before.

We wandered in, admired the way Charleesi had set her room up, and then the former Lady M appeared from the bathroom and nearly made Lady M jump out of the window in surprise.

Our itinerary was full – so with giggling and shuffling onto local buses we dragged the Birthday Girl in to Oxford for lunch, and then to a walking tour that covered history and filming locations alike (such as the tree under which a certain Malfoy was transformed into a ferret). Cream tea followed, and then on to a huge fireworks and bonfire display.

Lady M thought we were stopping then, but the Charleesi had other ideas, and so we went through a number of back alleys, guided by mobile phones to an undecorated side door in an unlit building. Lady M was prompted to pressed to ring the bell. 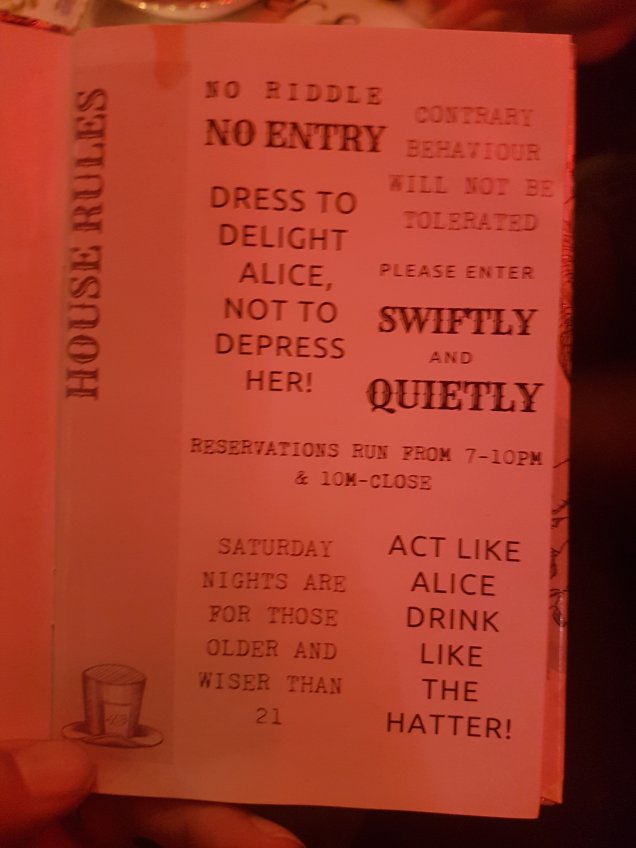 A voice from the speaker challenged her to tell her what had many keys but opened no locks. After a moment’s fluster she answered: a piano, and we were admitted to The Mad Hatter – an Alice in Wonderland-themed speakeasy that was also running a 1920s evening for fireworks night.

We had a great evening. Gin was served in teapots, and other inventive cocktails followed later, including alcoholic milkshakes and blue cheese martinis. We staggered off happily back to the halls after that, with the two Lady Ms having a loudly giggly time as we made our way back.

Oh, and to finish the evening in true student style, the Charleesi and I got some pizzas in while we played card games.

The morning saw us take in the Oxford University Botanical Gardens and explore the new Westfield shopping centre before grabbing some food from the Lebanese grill.

So that was our quiet week off – no wonder it’s taken me a while to get the energy back to start functioning again!

One of the questions I’ve been asked by a couple of people since the weekend has been about which of the costumes I wore was my favourite.

MCM Comiccon was a long weekend that seems to have both passed in a blur and to have been never-ending. On a quick count on fingers it worked out as being a five day extravaganza if you count travel: we travelled up after work on Thursday and meandered home in a daze on Monday. 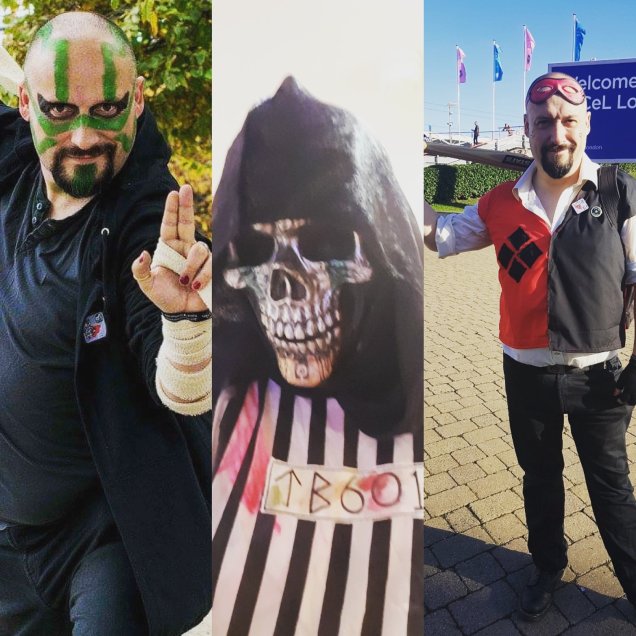 Of the three costumes – Karnak, the deatheater, and the gender-bent Harley Quinn – I had the most fun with the unmasked ones.

Karnak was great for martial arts styled photos, and especially in using my Body Balance experience to strike yoga positions. The problem is that the character tends to be quite serious, so my tendency to grin for the camera didn’t always jive with the look. The green greasepaint design was fun though, and I soon learned that I was the only Inhumans cosplayer at the event – much to the delight of one photographer.

The Harley costume therefore fit my sense of silliness and fun – and also gave me more license to mess about with people. I was the only male Harley who wasn’t cross-playing, choosing my own interpretation instead – and the impression I got was that most of those trying cross-play were aiming for sultry expressions rather than bright and fun.

As a consequence I had more fun, and more poses requested with people with the Harley costume than any of the others – so that one gets my fond nod for having been my favourite.

It was simple, didn’t involve a lot of preparation – and no greasepaint to rub off on anyone (sorry Tom), or worry about smudges. I’ll be revisiting the mask as it rode up every time I smiled, and possibly reworking the baseball bat, though the smaller size did make it easier to transport and stick in bags when not in use.

The deatheater? Well I learned that thick masks are intimidating and too hot for extended use, and while it was a fun concept, it just didn’t quite work for me. Lessons learned, and all that.

Entertaining Book Cover of the Day #bookstagram #librarylife #bibliophile #brevertonsencyclopedias
I may have accumulated a few incomplete sets over the years - I've decided to store them in a pretty jar I had lying around #geeklife #thingsyoufindinageekhouse #clickyclackymathrocks #dicegoblin
What's the point of having pretty dice if you can't get bags and boxes to hold them? #clickyclackymathrocks #dicegoblin
Quite unexpectedly, a Kickstarter appeared: a wonderful ttrpg book that I'm looking forward to integrating into wider games at the very least #kickstarter #thirstyswordlesbians #evilhatproductions #whatalovelysurprise #lgbtqia
Dice goblin energy? That'll be @mothermafiacosplay then. I shall admit to nothing #shiny #clickyclackymathrocks #dice #dicegoblin #ttrpgdice #howmanyistoomany
Clicky-clacky math rock time #newdice #dicegoblin #dungeonsanddragons