I think it was at this point in the month that I looked at the prompts and my urge to draw monsters came to the fore. 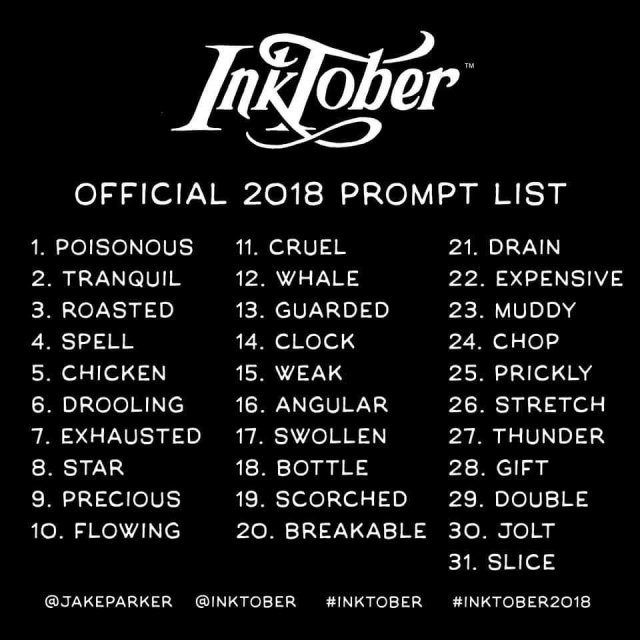 Anyone who’s been keeping half an eye on my Instagram feed knows I regularly create otherworldly creatures as a form of stress relief and use pretty much any random piece of scrap paper around me to do so. This includes memos, minutes for meetings, post-it notes, and routing slips.

Having resisted the urge to draw a chicken for the #roasted prompt, I felt that actually drawing a chicken was too simple. Perhaps a reference to courage and it’s lack in an individual was a more fun direction to go while still giving me a chance to draw something with big teeth and claws.

This is actually my second attempt at the picture. The first was from a head-on view of the person running away, with a large claw and monstrous face in the background. It… just didn’t work as a composition.

So I went for a more cartoon-like figure skedaddling away from something outrageously huge, allowing me to get a better sense of enormous scale in quite a small drawing space.

Day Six brought a prompt that immediately felt related – drool – and is a not even subtly Giger-esque beastie with the prerequisite mouthful of drool. I drew it in gel-ink while waiting in the reception of an eye clinic while Lady M was being seen by an optician.

The elderly couple next to me very politely shuffled away as it formed pretty much in one long unbroken sequence in the page. I suspect I had the slightly manic look of the classic dabbler in Things That Man Is Not Meant To Know while scribbling away on this.