These are the two sketches where I used colour with two different approaches, and reposting them here has reminded me that I really should do more of them this month, as well as on an ongoing basis.

Most of the time, when I put pen to paper, I’ve stuck to a monochrome approach because the images have been off-the-cuff and generally unplanned. It’s why I refer to them as doodles, because they are made without much conscious thought on subject or composition.

The two images highlighted in this post had more thought and time put into them, which is part of why I broke out the Sharpies, and a set of brush pens that Lady M bought me a while ago that have been great for experimenting with blending recently.

The prompt for Day Nine was #precious – and on the Facebook group for Inktober there were a lot of Gollum and Lord of the Rings jokes. Being the contrary soul that I am, I was never going to go that route anyway. I did think on riches and treasures, but the thought is filling a page with heaps of coins and treasure chests didn’t really appeal, so instead I thought of what is really precious to me – the people I love.

At the heart of the page therefore is my polyamorous heart – the heart and infinity sign being a common polya symbol – and around it the hearts of people that I love and who love me. These are not necessarily romantic or sexual relationships – some are platonic, others are bonds of family.

That sea of connection, love, and support is what is precious to me in good times and bad – and even this feels inadequate as a way of expressing it. 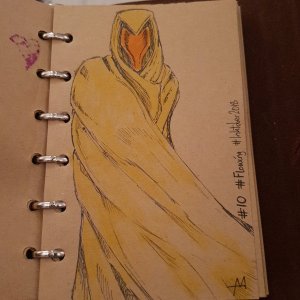 Day Ten was the #flowing prompt – and the temptation was to go with something simple like a river or a waterfall. Instead I went with flowing robes. This came partly from wanting to do a more detailed piece of artwork, and wanting to practice cloth flows.

Hence the mysterious, masked, figure in yellow robes above which harks back to The King In Yellow from the rambling Lovecraftian mythology that I love so much.

The faded yellows come as much from the absorbent paper and the brush pen starting to run out of ink, but I like the effect of semi-bleached robes the colour of bone.