One of the things I’m enjoying about this year’s prompts is the mix of definite items and general concepts for illustration. For every chicken there’s a roasted, for every cruel there’s a whale. By total coincidence, those are the two prompts covered today – cruel and whale.

Cruel is another prompt that had some people a little nervous online for fear of people using it as an excuse to flood their social media feeds with gore and horror.

I’ll admit it was also where my mind went at first, an excuse to lean in on my usual taste for monstrosities and disturbing images. A moment’s consideration had me deciding to go another route though. 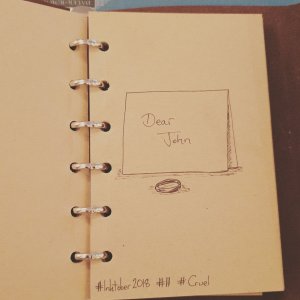 I doodled a few rough concepts on scrap paper before a simple “Dear John” note on a tabletop outline made me stop. For those who haven’t encountered this imagery before, it refers to a scenario of a man returning from work to find a simple note and a wedding ring left by an absent spouse, simply saying their marriage is over.

There’s a resonant tragedy in that of people not communicating at the best, or of someone escaping an intolerable situation at worst – and with no more context than the note and the ring, you are free to imagine any number of scenarios that may have led to that moment – and that is part of the cruelty of the piece in its own right: that in it’s suddenness, you don’t know what’s next or how you got here. 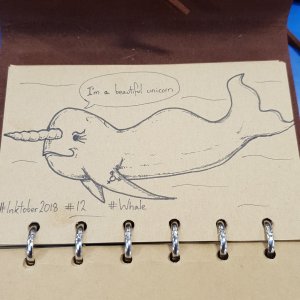 On a lighter note, the twelfth prompt: “whale” was drawn on a visit to see Lady S while she was still at work in her local library. I sketched and doodled away, and somewhere along the line the idea of a figurative whale crossed over with our jokes about unicorns, especially with regard to our triad. Narwhales are sometimes known as the unicorns of the sea – and their horns are believed to have inspired the medieval stories of unicorns in the first place.

Between that and Lady S’ own journey of examining her own non-binary gender expression recently, it seemed that Kay the non-binary narwhale was due to appear on the scene. The tattoo on the fin represents gender-diversity, and the eye design, rather than just being eyelashes that are particularly dashing, is a non-binary gender sigil that I spotted online.

They look happy, don’t they?

It's been a long day, time to unwind a bit
Gathering for the staff LGBTQ+ Staff Network
Reference tools for winging roleplay game sessions #dungeonsanddragons #booksoftables
These arrived yesterday from a Kickstarter, just in time for the next leg of the D&D campaign with the DDC
That's it, we've broken the cheese, biscuits, and wine out
Quoth the Funko, "nevermore" #toyphotography #funkopops #geeklife #edgarallenpoe #thingsyoufindinageekhouse
Join 1,339 other subscribers.