A slightly later posting for today as I’ve been travelling. After work yesterday I went down to Portsmouth to spend the night with Lady S while Lady M collapsed with man-flu. The drawings and sketches are continuing apace however.

I actually found these two prompts more difficult than anticipated. I’m not sure if it was time constraints in a busy week, tiredness, or just a dip in focus, but these illustrations are both very simple. That said, I drew two things for day fourteen so I’ll present them both.

To the general viewer this may be interpreted as a symbol of submission and surrender – and I was very careful to make the image gender-neutral. The dynamic being represented however is more complex than that.

In such places and times talking to, let alone touching, someone who is collared without getting permission from the Dominant can be seen as a major faux pas. The collared submissive is guarded as part of their social contract.

There are as many nuances and takes on this as there are people who take collars, so the complexity of it fascinated me enough to depict it.

Day fourteen was a very busy day and evening so I scribbled this first version shortly before going to bed. If nothing else it meant I could say that I had actually done something every day. The #clock prompt left me reluctant to simply depict a watch, or a sundial. This placeholder was the best I could come up with.

The next morning I knew what I wanted to present instead – the dandelion clocks that I loved – indeed do still love – to blow on to spread their seeds. 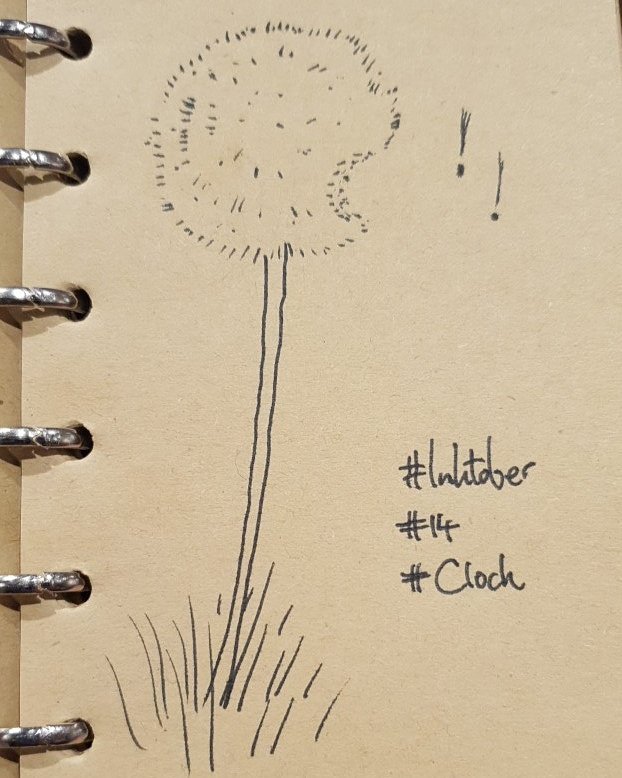 So on my lunch break I came up with a better representative of the prompt. It was the first time I’ve considered drawing anything like it, so it’s a slightly impressionist version I think. For something knocked up quickly, I’m quite happy both with the image and with the slant on the prompt.