And so here we go into the last ten pictures for October and this amazing challenge. Last year I didn’t complete the whole thing, largely because I came into it by accident and didn’t even know where people were getting their prompts from.

This year has felt more of a project to complete and with that has come both tensions and anticipations by equal measure.

Day twenty-one went through two concepts. The prompt was: Drain. Initially I thought of something running in the fantasy vein that involved vampires. A creature draining the lifeblood from it victim was my first idea, but I didn’t have a lot of mental energy this day.

I needed to do something more simple, and so the image of a physical drain in the street sprang to mind. Having something noxious slipping down it provides a sense of movement – and it was a good exercise in perspective. 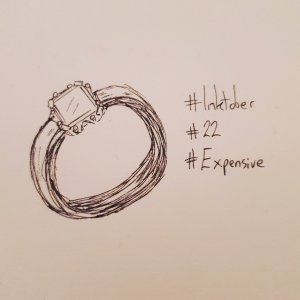 Day twenty-two brought the prompt of ‘expensive’ and so I went with something that could reflect that on several fronts depending on your mood. A diamond engagement ring is traditionally supposed to cost a good few months’ wages – making it an expensive declaration of love.

Depending on your own experiences and feelings about marriage, you can also make sulkier arguments about the cost of marriage against your own selfish needs – but it’s not what my intentions for the piece are.

It's been a long day, time to unwind a bit
Gathering for the staff LGBTQ+ Staff Network
Reference tools for winging roleplay game sessions #dungeonsanddragons #booksoftables
These arrived yesterday from a Kickstarter, just in time for the next leg of the D&D campaign with the DDC
That's it, we've broken the cheese, biscuits, and wine out
Quoth the Funko, "nevermore" #toyphotography #funkopops #geeklife #edgarallenpoe #thingsyoufindinageekhouse
Join 1,339 other subscribers.