I was just starting to feel unwell as an unpleasant bug that’s doing the rounds decided to take a run at my immune system.

As a result, I had a couple of days where I didn’t keep up with the pace of things as well as I had been. I fell behind as the week progressed, only to have a concerted surge back on top as the weekend drew to a close. 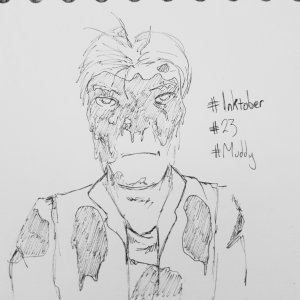 Number twenty-three was a prompt that I might have made more of, but I decided to use ‘muddy’ as an excuse to show someone covered in muck.

You could interpret it as a sight gag on the mudslinging that seems to have replaced political and social discourse, but that is entirely your decision. It only occurred to me after I’d finished it.

In general this was a quick and, if you’ll forgive the pun, dirty sketch while I was watching TV and sipping lemsip – it definitely isn’t one of my favourites. 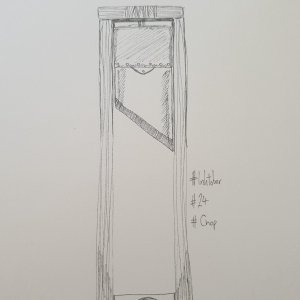 Number twenty-four, by comparison, was fun to do as I just sat quietly and did detail work. I initially thought I might do something that depicted combat, but decided instead to go for a guillotine. This gave me an excuse to practice depicting an object rather than my usual grotesques – and I really like how this one turned out, with clean lines and a sense of what it is immediately apparent.

For anyone who needs one
Eye patch for the Odin cosplay arrived so rude not to grab a quick shot #cosplayguy #eyepatch #odin #cosplayforall #geeklife
Something Strange on the balcony... #marvelzombie #funkopops #geeklife #thingsyoufindinageekhouse #drstrange #whatif
Entertaining Book Cover of the Day #librarylife #bookcover #bibliophile
Ahead of tomorrow's game, I've been making tokens for various NPCs. Who would have thought the dwarven forgemaster was a werewolf? #dungeonmaster #heroforge #token #werewolf
Been looking for this for a while - Entertaining Book Cover of the Day #bibliophile #graphicnovels
Join 1,339 other subscribers.