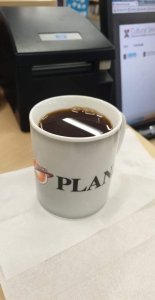 I was treated to a fresh cup of coffee, waiting for me when I got in to work this morning. How very civilised, and relatively unusual that was. People working in libraries tend to be fairly iconoclastic loners, even working as a group. We tend to have a hugely diverse set of backgrounds and prior careers, leading to as awkward a set of independent attitudes and worldviews as you might hope for.

Somehow that seems to often manifest in everyone sorting out their own refreshments, hence my surprise at finding a big mug of black coffee waiting for me.

I might have a reputation for being a bit grouchy and uncoordinated first thing in the morning. I’m choosing to believe this was a nod to that from someone I’ve been working alongside for the best part of seven years now, rather than a bribe for their not having to perform Rhymetime.

I handled Rhymetime. We had fun. There was only one child startled into a screaming fit; and no injuries worth reporting were sustained if you don’t count the toddlers that headbutted each other.

There weren’t many parents there, and I didn’t recognise any of them, but I did recognise the slightly starry-eyed expressions among a few of the mums swayed by singing and a jolly appearance. I could almost hear the simultaneous laughter and growling of lady s and Lady M as I politely packed everything away at the end of the session. It’s flattering, and there’s no harm to a low level flirt, but that’s all it is.

All in all, it wasn’t too odd a day, and it was reassuring to work a Saturday in a library where I first restarted in libraries for a change.