I think there can be few things as comparable to a needle-drop sound effect as being in a local Greggs with the girlfriend after dropping little man to school and receiving a message on our group chat basically saying: don’t worry, I’ve been in a car accident, I’m okay, will probably be home when you get in. 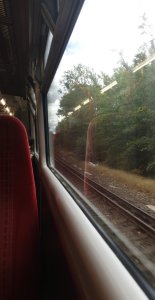 That was this morning. Lady M was rear-ended on the M25 when she had to brake due to the person in front of her driving erratically and recklessly. She’s back from A&E now with a diagnosis of whiplash and shock and I’ve told her to not even consider logging in remotely to work. She’s otherwise okay – aside from the toe she broke the other day when she tried to walk through a wall into the kitchen.

Because there’s literally nothing I can do about it, or to help, I’ve not dropped everything; and have waited for my previously booked train to take me home. I’m now on the way for the next couple of hours – but at least it’s a mostly empty carriage.

No sense in making more drama than there already is. Lady M is shaken but generally intact. The car is damaged but driveable, and work are sorting out a replacement while it gets repaired.

Sigh. If I’m making it sound like lady s and I aren’t concerned, that’s very much not the case, but we’re all three of us pretty pragmatic souls. I’ve left lady s curled up with YouTube clips, and hopefully will soon find Lady M curled up with something trashy on Netflix.