It’s that time of year where my doodles and scratchings become a bit more purposeful. Inktober has a series of prompts, but is open to any interpretation or variance along the way. The key is to produce something every day and just have fun.

Some days will be easier than others, and some pictures will be more complex than others, certainly if last year is anything to go by. My interpretation of the challenge is to do it by the seat of my pants – ie no forward planning, and one done each day.

Prompt One is ‘Ring’, which led immediately to consideration of all things circular and circulating. I did this with two pens: a light grey fineliner at 0.5mm and a black fineliner at 0.3mm.

I wanted to create a spinning vortex, some kind of rotating storm, which prompted the lightning discharges, but the doodling eye then wanted to surround it. Whether this was a generator or a boundary I’m still not sure. Looking at it now, I’m minded of a fisheye camera view of a city below. 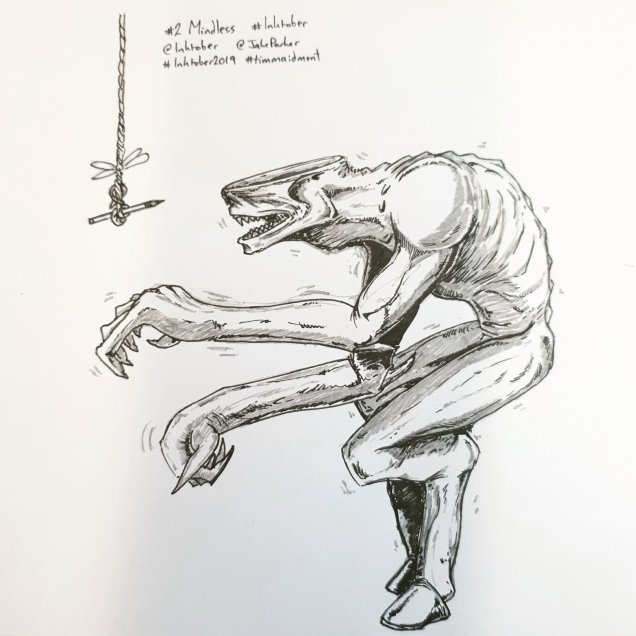 Prompt Two is ‘Mindless’ – and my head went wandering all over the place before settling on a monster. I love creating grotesques, and the thought of making something literally mindless sparked this beastie.

It’s inspired by any number of zombie and demon creatures from films and other media, with a particular nod to the feral demons in the Constantine movie.

A truncated and vacant brainpan fills the brief for mindless, and then it was just a matter of building the anatomy into something that looks both in the realm of the possible and at the same time predatory and wrong.

The decision to throw a pen on a string in front of it came at the last moment to balance the picture and have it as something for the creature to be reaching for.

There’s a lot of sparks on some of the online forums about what constitutes the “right” way to do this challenge – and the creator of the challenge has just told people to do what they want with whatever they want because it’s all a bit of fun. The pen therefore is a bit of a tongue in cheek reference to that, with the creature shaking and twitching as to whether to grasp it.

So there’s day one and two done.