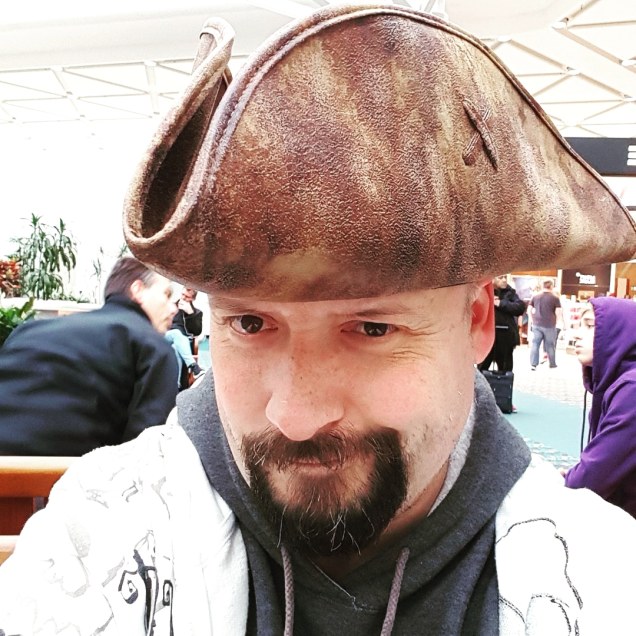 Tim Maidment lives in Sunbury which claims to be on the Surrey borders, where he makes things up for a living. He also occasionally turns up at the local library to shelve the odd book and order people around while muttering under his breath about rotas, timetables and people having the sheer audacity to be sick or want time off.

He’ll tell anyone who will listen that he far prefers it to working in IT Project Management, especially now that the flying attack monkeys have lost his trail; and that any job that allows him to murder five people in print before breakfast, and excuse his browser history as research is one worth fighting for.

He’s also been known to cosplay as a number of characters from pop culture, under the name Tango Mike Cosplay – often with the UK Cosplay Community and Squad UK who are strong anti-bullying advocates.

He has almost perfected the art of appearing to be a reasonably sane member of modern society, and hardly ever causes more than small ripples in the space-time continuum these days unless he’s slightly bored.

An out and slightly bemused bisexual and polyamorous oddball, even he’s still not quite sure how he manages to find himself casually chatting with family, partners, and a variety of wonderfully strange friends without more than the occasional glass of diet coke being knocked in people’s laps due to clumsiness.

An increasing array of artistic things can be found at ludd72.redbubble.com based on what feels like a lifetime of drawing and doodling on any available surface.

You can contact him by email at tjtmaidment@gmail.com and find him on various other parts of social media such as:

If anyone reads this far down, feel free to ask me about the short-legged,ridge-backed,long-tailed terrier that’s green.

Random lines turned into something grumpy #lineart #artist #biro #sketchbookdrawing #sketchbook
Playing around, making maps, as you do #dungeonmaster #inkarnate #dungeonsanddragons #map
Entertaining Book Cover of the Day #librarylife #bookstagram #bibliophile a gift from @mothermafiacosplay and absolutely fascinating at the rich lives uncovered
Random pencil sketch last night #sketchpad #pencildrawing #sketch #lineart #artist #scifiart #powerarmour
Flowers from my parents starting to open and bloom this morning #goodmorning
A week's worth of chucking things out and recycling like a fiend and I have a lovely corner of the room now #geeklife #shelving #lighting #thingsyoufindinageekhouse