Week 12 – Crawling Among The Dead

We picked up where we had left off, in a short lull in action. A tense game of cat and mouse had begun, and there were still far too many places from which the ghouls could strike. A small shrine was found – crude and bloody – that confirmed a link between these ghouls and this unknown evil deity – the dark obex symbol that was both on the shrine and carved into the foreheads of these ghouls.

As they began to use magic to seal off key points, or set alarms, the group continued to listen and watch carefully. Their observational skills picked up the sound of distant chains, of metal on stone and behind it all, the constant wailing – but they couldn’t work out where it was coming from. 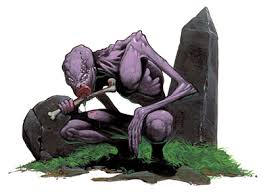 A crude system of finding dead ends and making sure that there were no ghouls behind them had to be devised – and much of the grind of this session came from trying to coordinate their actions in the dark, twisting and noxious tunnels. The ghoul counter attack, when it came, was on several fronts. Ghasts crept near enough that their awful smell began to overwhelm party members, even though they couldn’t be seen.

The smell of the grave overcame everything, and only the bard’s music and song lifted their morale enough to still be effective. Then the ghouls struck in coordinated waves, aiding each other in an attempt to break through the walls of steel put up by the Warforged. And then the wheep was seen, gliding smoothly along a tunnel towards them, dripping gore and vile poisons.

The attack failed – breaking on the warforged and shattered by a lightning bolt cast by Spugnoir. The wheep whirled around and daintily stepped away out of sight with its injuries visibly healing before their eyes, and the remaining ghouls and ghasts covered its retreat.

By the end of the session, they had at least eliminated a sizeable enemy force, discovered one of the ghoul dens and retrieved some small treasures. They had also managed to block off a number of passages and discovered the ends of several others. It now appeared that they had a more manageable number of options, but the wheep, and who else knew what else, was still out there. Wheeps are normally servants of greater undead, so something vile was down here with them.

Back to Week Eleven | On to Week Thirteen