We’re having a quiet day chez myr s. The dogs are in close attendance as a Sunday roast is prepared; and the cats have retreated under the sofas to pursue their private vendettas out of our sight.

The tegu has appeared briefly to sniff the air and gone back to sleep. The tortoise has paused in his efforts to headbut his enclosure down. The cub is… Well he’s engrossed in YouTube videos that mostly seem to be full of people overreacting with screams at the camera.

So that’s the extent of our excitement today, with music contesting with a sport channel for providing background noise. We had a late night fuelled by YouTube so our body clocks are urging a slow day ahead of the couple of hour’ work that myr s is scheduled for later.

I plan to finish and post a short fiction piece later while they work: I’m determined to keep fighting to get back to writing regularly.

It’s been a busy couple of days. Work on Saturday was steady, with few problems bar some ongoing issues with the building that prompted me to leave irritated emails for Property Services to find when they got back after the weekend. We were short on staff, but kept our spirits up, managed to get a Pride display sorted, and generally had a good day. 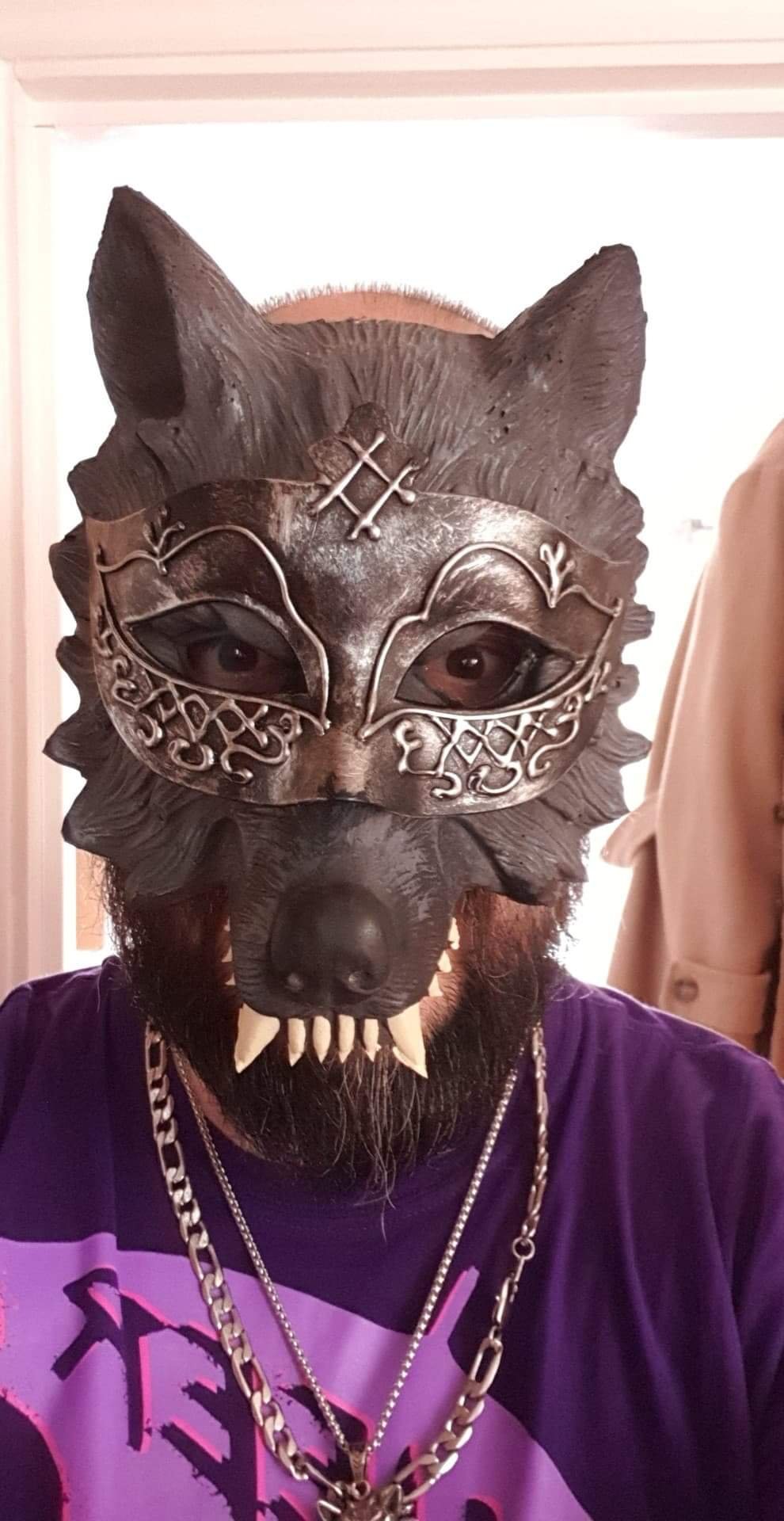 Sunday saw me travelling down to Portsmouth to attend a masquerade event with Lady S. As I was meeting her from her work to head straight there, this meant that I walked the sunny streets of Cosham and Drayton suited and booted with a walking cane and wolfshead brooch on my lapel.

Compared to the people half-falling in arguments out of pubs, newsagents, and off-licences I was therefore a little overdressed and conspicuous. It led to some bemused frowns of concentration on some faces. If they could have seen inside my bag, with its masks, paddles, and assorted elements, those frowns would no doubt have been even more confused.

The event itself, on its second anniversary of running, was a lovely celebration of humour, friendships and general debauchery as you might expect, and we were both glad we’d pushed through nerves and tiredness to attend. It was a late night, all in all, but I knew I could catnap on the way home.

The one thing I hadn’t planned in was the torrential rain that hit while I was on the train home. It’s my own dumb fault for not reading weather warnings. All I can say is that walking from the station in a suit was a refreshing experience..!

And so back to work – a short but eventful day, and a body that I’m not sure if it’s aching from being in the rain, or from exertions!

Back on the train home, with a slightly reduced suitcase (I’ve been able to zipper up the expansion panels now I’ve dropped off presents), and I’m rueing the separation caused by the distance currently between us. I love my partners deeply, and hate leaving either of them, even as I look forward to seeing each again.

I’m travelling by train today on an uncomplicated route, so I’m engaged in some idle people-watching in the quiet carriage. Some are solitary snoozers, others quietly chatty students. There’s an elderly mother with her adult daughter, both weighed down in what can only be Christmas shopping.

There’s been a quietly British professionalism to the guard and ticket inspector as they work down the carriages, handing out advice as needed about connections and alternate routes. It’s been reassuring in its familiarity of language and tone.

All in all, here’s to getting home and putting the kettle on

Today’s the first day really, since starting at the local library, that I’ve had a chance to really sit and do some writing. Even then, I’m doing this on the move from the (in)famous Ace Cafe in London, just outside Wembley while t’other half is having a job interview just down the road. Fingers crossed she’ll get it, of course – though no doubt I’ve just jinxed that by writing about it. In the meantime I’m soaking up the ambience of this converted garage, watching the world go by.

There’s local business men in one corner on their laptops, discussing business meeting strategy. Across the way from me, a motorcycle instructor is resting with a large mug of tea, rubbing his eyes and slumped slightly. He definitely projects a strong impression of being tired and grateful for the chance to rest. Two tables down, a young indian couple are chatting, chaperoned by (at a guess), her brother. A big fat greasy spoon fried breakfast is being devoured by them, sausage and black pudding and all; there’s no doubt that they are what my parents would have called ‘westernised’, and no doubt there are some who would still be scandalized by it all. I just see happy, carefree faces with grins and the delight that comes from the rapid chatter of good company and relaxation.

The staff here are smiling and chatty, with that relaxed ease that comes with experience with all sorts of customers – and given both the plentiful adverts and chalkboard notices about bike meets and the upcoming Brighton Burn-Up, and the warning notices about bike safety and curbing antisocial behaviour, there’s little doubt that there’s been a wide variety of human behaviour to get used to.

Everything here is well worn and functional, but in good working order – and the food and drink is both impeccable and promptly served up with a no nonsense approach. There’s a great relaxed atmosphere that comes from being a place where people don’t put on airs and graces, generally knows what they’re doing and takes responsibility for themselves. The music is constant but not so loud as to intrude and, as you might expect, the parking is copious.

I’m hoping Jo gets the job – not just for how it will secure us financially, but also so it gives me an excuse to come back here on occasion to people watch, write and relax…

Eye patch for the Odin cosplay arrived so rude not to grab a quick shot #cosplayguy #eyepatch #odin #cosplayforall #geeklife
Something Strange on the balcony... #marvelzombie #funkopops #geeklife #thingsyoufindinageekhouse #drstrange #whatif
Entertaining Book Cover of the Day #librarylife #bookcover #bibliophile
Ahead of tomorrow's game, I've been making tokens for various NPCs. Who would have thought the dwarven forgemaster was a werewolf? #dungeonmaster #heroforge #token #werewolf
Been looking for this for a while - Entertaining Book Cover of the Day #bibliophile #graphicnovels
Lunchtime doodle #pendrawing #biro
Join 1,339 other followers