Waking up this morning, everything hurt, and the thought of a ninety minute drive to Tampa really didn’t appeal. We forced ourselves up and out to hit good old Interstate 4 though, in search of Busch Gardens.

I’m pleased to report that the journey was relatively unremarkable despite a couple of satnav hiccups, and we made good time.

Busch gardens was always high on our list for thrill rides, which was why we made ourselves get out there despite being tired and footsore. The actual day was a bit of a mixed bag.

First, the good: the rides are great. Cheetah Hunt was a fast, long joy of a ride. We did wonder what the acceleration at the start would be like, but it was quite relaxed compared to the lightning fast shocks of Stealth and Rita (at Thorpe Park and Alton Towers, respectively). As a result, the 4000m track was long and smooth enough to appreciate rather than be endured.

Montu was also great fun, tucked away from the rest of the park so we basically just walked straight on. Its like a double length Nemesis Inferno ride with Egyptian stylings. 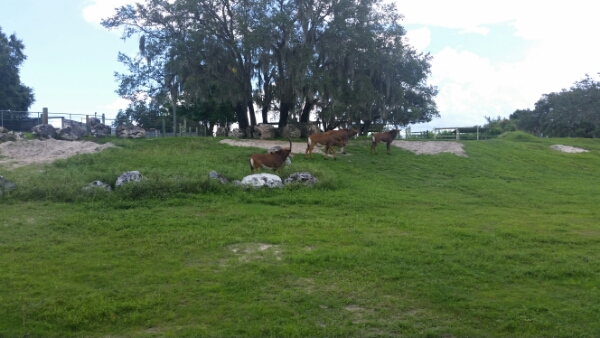 The train ride around the park gave us great views of the animals and helped us get round quicker on what was one of the hottest days yet – over 93F/34C. We hit both the big water rides, the Flume and the Tidal Wave, and managed to sneak in a bone-rattling spin around Gwazi, the wooden rollercoaster.

The problem is that we’ve come away feeling underwhelmed. The park wifi seems to be limited to just by the entrance rather than being park-wide or even just hotspots near rides.

Given that you are expected to use a smartphone app to use queue holding rather than a physical device like the ones used at Universal or Disney it completely blocked us from doing anything clever.

Instead we had to queue normally as we were using Lady M’s Hudl tablet by default and I turned off data roaming while abroad to save on charges, so only get data services when connected to wifi while we’re out here.

Customer service was patchy and the food was, well we’ll settle for okay, as we went for salads, fruit and a cupcake rather than the pasta with meat and slopped sauces that were the alternative.

In addition, if you’re going to force people to use lockers before they come on a ride, take a leaf from Universal’s playbook and invest in the tech to provide free short-term storage, or some sliding door free storage monitored by the platform crews as offered pretty much everywhere else, rather than force customers to spend a couple of quarters a go.

This doesn’t sound much but it quickly mounts up, especially if the locks eat your money and the staff look at you like you’ve just told them you’ve poured typhoid in the water fountain when you ask for assistance/your money back. It’s just part of a drip-drip-drip that made me realise that it all felt tired, and done better elsewhere.

I’m aware this sounds harsh, and to be fair there were plenty of happy and helpful staff there, but the disappointments linger longer in my brain than the joy of the rides and the beauty of the animals. It just underlines how important customer service is, and how just a few people being downbeat or distracted can strip away goodwill and good memories.

Okay, rant over. There’s just one more memory of note for today: my satnav is trying to kill me. I can prove it:

We were on our way back when Lady M happened to notice a Confederate flag flying through the trees beside the Interstate. I immediately made a Game of Thrones-related quip along the lines of “The South is Rising, but The North Remembers.” There may also have been a “Winter Is Coming” joke along the way.

From that point on, our rental satnav revealed its Lannister colours and started giving late, unclear or downright wrong instructions that had us going in circles between exits 65-68 eastbound on I4. In the end, after one too many sudden lane shifts to correct course I ordered the unit’s switch off/execution. I fully expect to see Made in Casterley Rock embossed in its casing somewhere.

Tomorrow brings a quieter schedule, and one firmly back on Disney turf: Blizzard Beach and Typhoon, with an evening meal booked at Le Cellier Steakhouse at Epcot. Can’t wait.

This really has been a strange week, and a busy one at the library. I’ve been running an Online Basics Course for OAPs and people bullied into it by the DWP, ran this month’s Chatterbooks session, and took this week’s Rhymetime with 30-40 preschool toddlers and parents.

All this in the week our assistant manager retired, staff shortages left us running the place on two people, stock checks were needed, roughly 200 new books needed receipting and processing, and another 300 books or so needed pulling from the shelves and either recirculated or withdrawn. So no pressure or anything.

And then there were the customers, who were generally good natured and a joy, except for the one’s who weren’t.

My, there were a lot of those. From the not so passive-aggressive mass photocopying people who nearly came to blows while screeching about how they paid their council tax for some peace and quiet, to the reading group who didn’t see why they should pay for lost books, we had it all.

It’s been a week of normally reasonable people all choosing to have complex, fiddly, or downright bizarre requests, all delivered in bad tempers, grumpiness, or total lack of irony.

We blame the sudden change from winter storms to sunshine with a side order of higher temperatures that seem to have got sinuses inflamed and people suddenly overdressed and overheated.

See, we’re British, we can find something to complain about with any change in the weather.

I can tell it’s a Monday, my eyes feel gritty and I really want to be curled up in bed. It is a phenomenon I’m well familiar with, as I’m sure many of you are too.

Having had a relatively quiet weekend, I cannot blame the tiredness on anything physical, and apart from a slightly runny nose I don’t appear to be hosting more than the usual viral and germ related infestations and infections we all barely notice on a daily basis.

I can only put it down to selfish laziness on a subconscious level. This means I can either torment myself uselessly about it or kick myself up the backside and force myself to get on with working and pretending to be a productive member of society.

Can I go back to being a self involved, unaware slug please?

I’ll have to go take some photos of the monstrous spiders currently decorating the outside of my block of flats – they seem to have crossbred with something from the bugs from Starship Troopers and I’m pretty sure have started eating my car judging by the number of webs attaching it to other cars, bushes and the nearest lamppost.

Worse, they’re spreading – when you can see them hanging in the air from thirty foot away and identify them from their silhouettes when you’re halfway down the road, you know there’s something going on. I think they’ve got the scent of the deli at the local supermarket and are building a supply chain to start stealing off-cuts of salami and discarded haddock.

If this station goes off-air, I swear I’ll be found in a cocoon hanging off my balcony…